An overnight bedroom fire in a multiple residential building drew seven fire companies and displaced the residents to a hotel.

At about 11:22 p.m. on Saturday, police received a 9-1-1 call reporting that a bedroom in Unit 1 of 910 Renate Drive had become fully engulfed in flames, according to Hillsborough Police.

The fire was brought under control and was contained to the single unit, police said. 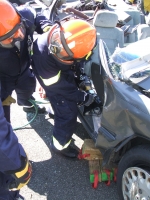