SOMERVILLE (WABC) -- Authorities are on the scene of yet another roof collapse in New Jersey Monday.

The roof of the vacant warehouse caved in from the weight of the snow on East Main Street in Somerville around 10 a.m., across the street from the Somerville Court House.

The entire roof of the one-story structure, formerly Somerville Aluminum, collapsed down onto the ground floor.

There are no reports of any injuries, but some street closures were reported around the area.

The warehouse has been vacant for some time and will likely now be demolished.

It was the latest in a series of dozens of roof collapses of commercial structures. Many of the buildings are vacant with flat roofs and have been in a state of disrepair.

The collapse was attributed to the weight of ice and snow. Somerville firefighters responded to a similar collapse on Friday. 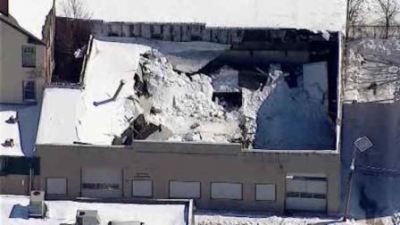