The blaze was first reported at 7:42 p.m. as occurring in a commercial building at 888 Easton Avenue in the Franklin Township section of Somerset, Sgt. Philip Rizzo said in a news release. The property houses an office for Assemblyman Joseph Danielson (D-17), Barrood Family Associates and several medical practices.

The blaze spread quickly through the building and took hours to bring under control. Firefighters were on the scene until 6 a.m. extinguishing flare ups within the structure.

Two firefighters sustained minor injuries during firefighting efforts -- one slipped and fell on ice and the other suffered from hypothermia. Both firefighters were transported to the hospital and released.

The cause of the fire is currently unknown and the blaze is under investigation by the Franklin Township Office of Fire Prevention.

Portions of Easton Avenue and Foxwood Drive were shut down throughout the night to accommodate the on-scene apparatus. 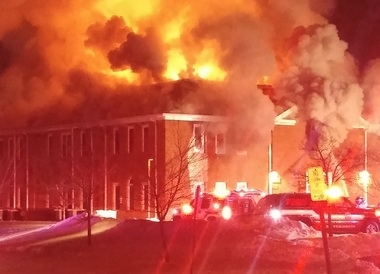